Diplomats rarely stay in the same place for more than a couple of years in order to prevent them from becoming part of their host country’s society and loosing their outsider’s view.

Members of the local staff, however, are employed by the Embassy on a permanent basis. To the diplomats they are invaluable: Since they are citizens of the host country they know their way around, speak the local language and can pave the way for many things.

The Permanent Representation of Switzerland to the Council of Europe is lucky to have not only one, but two of these gems: 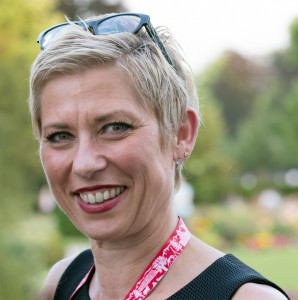 Nathalie is probably the only truly irreplaceable member of the Permanent Representation. Officially, the multilingual Alsatian is assistant to the ambassador, but in reality she takes care of everything for everybody, at any time: No matter, if the problem is a lost key, a cut-off phone line or the search for a suitable flat: As soon as Nathalie says “I’ll take care of it”, it’s as good as done.

His official title – “Chauffeur” – does not really do Marcello justice, because his helpfulness and his cheery disposition make him a gift for any embassy. Since Marcello’s father was in charge of security at the Council of Europe, the Alsatian with Italian roots practically grew up in the place and knows everybody and everything there. In the Permanent Representation Marcello takes care of the vehicles as well as all administrative matters connected to them. He prepares the files for the meetings of the diplomats and – being a fully trained hotel clerk – looks after the guests at the receptions held by the ambassador.