The European Commission for the Efficiency of Justice (CEPEJ) was established in 2002 by the Committee of Ministers, the decision making body of the Council of Europe.

The CEPEJ achieves its objectives by:

Furthermore, the Commission establishes links with research institutes; organises conferences, round tables and seminars; creates networks of professionals involved in the justice area and offers them a platform for exchange and sets up co-operation programmes and roadshows at national level.

Finally, the CEPEJ prepares opinions for various Council of Europe bodies such as the Parliamentary Assembly (PACE), the European Court of Human Rights (ECtHR) or the Secretary General. Upon request, non-member States of the Council of Europe, as well as international institutions, may tap into the Commission’s know-how as well.

The CEPEJ is neither a supervisory nor a monitoring body of the Council of Europe. It carries out its tasks either on its own initiative or at the request of one or more Council of Europe member States, but always in accordance with the latter. Country visits, for example, which provide additional information concerning the law and practice, are undertaken with the agreement of the country concerned.

Composition of the CEPEJ 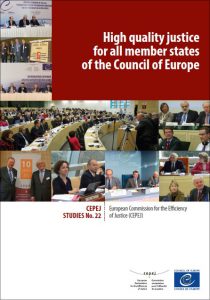 Each member State of the Council of Europe appoints one expert who has in-depth knowledge of the administration, functioning and efficiency of civil, criminal and/or administrative justice to the CEPEJ. The Commission is chaired by a President and a Vice-President, both elected for a two-year term of office, renewable once. Several non-member States have observer status in the CEPEJ and organisations like the European Union, the World Bank or the European Association of Judges are associated with the Commission.

When needed, the CEPEJ can set up working groups in order to deal with certain topics. Working groups are composed of experts from the CEPEJ and/or specialists in the field in question proposed by the Council of Europe member States. For example, the

The Bureau co-ordinates the work of the CEPEJ and prepares the draft order of business for the meetings of the CEPEJ as well as its draft annual activity report. The Bureau is composed of the President, the Vice-President and up to two experts who are elected for two years and may be re-elected once. The Bureau is assisted by a secretariat in all administrative and organisational matters.

In order to support its activities through a better understanding of the day to day functioning of courts and to highlight best practices the CEPEJ has set up a network of Pilot Courts in the Council of Europe member states. The network serves its members as well as the CEPEJ as a forum for information, reflection and implementation and the CEPEJ relies on it to promote quality of justice.

In 2007, the CEPEJ set up the Saturn Centre for judicial time management (Study and Analysis of judicial Time Use Research Network). The Centre acts as a European observatory by collecting information necessary for the knowledge of judicial timeframes in the Council of Europe member States. An analysis of the situation will enable the latter to implement policies aiming to prevent violations of the right for a fair trial within a reasonable time frame – a right specifically protected by Article 6 of the European Convention on Human Rights (ECHR). Furthermore, the Saturn Centre is in charge of the promotion and assessment of the guidelines for judicial time management.

In 2005, the CEPEJ created the “Crystal Scales of Justice” Prize in order to discover and highlight innovative and efficient practices used for court organisation or for the conduct of judicial proceedings.

Celebrated each year on October 25th, the European Day of Justice aims to inform citizens about their rights and to promote the work of the Council of Europe and the European Commission in the field of justice through simulation of procedures and information sessions. Furthermore, some courts open their doors to the public.

Council of Europe video clip about the CEPEJ: