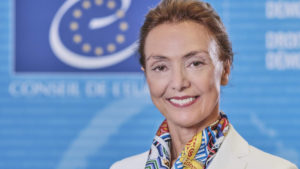 She is only the second woman after Catherine Lalumière (France, 1989-1994) to hold this position in the history of Europe’s oldest and largest intergovernmental organisation, founded 70 years ago to protect and promote the three core values: human rights, democracy and the rule of law.

Marija Pejčinović Burić holds a bachelor’s degree in economics from the University of Zagreb as well as a master’s degree in European Studies from the College of Europe in Bruges/Belgium.

After having started her career in the corporate environment, Marija Pejčinović Burić became involved in the European Movement, working at the Europe House in Zagreb from 1991 – 1997 and becoming its director in 1995.

In 2008, she was elected to the Croatian Parliament where she was i.a. a member of Croatia’s delegation to the Parliamentary Assembly (PACE) of the Council of Europe. As an independent European policy expert she worked on projects with the European Union and the UN Development Programme as well as bilaterally funded projects.

In this role she chaired the Committee of Ministers of the Council of Europe during the Croatian Chairmanship of this decision-making body of the organisation from May to November 2018.